If one is organizing a session for postdocs and grad students to talk speak, one should
I think on the whole, it went fairly well.
Posted by Barefoot Doctoral at 6:44 AM 2 comments:

Email ThisBlogThis!Share to TwitterShare to FacebookShare to Pinterest
Labels: conferences

Epsilon likes calamari. So, of course, over appetizers, my partner tells him about

Ever since, Epsilon has been wiggling his fingers at his father, and declaring "Mean Cthulhu, you lunch!" However, when the play wanders in my direction, he says "Nice Cthulhu" and gives me a tentacled kiss. 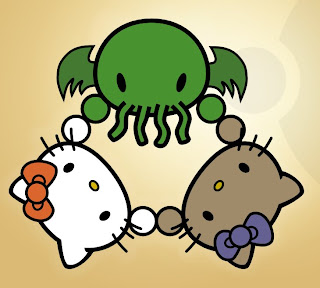 Now, if he's cranky and needs comforting, he'll calm down to stories involving diggers and princesses that Cthulhu will alternately eat or play with.

Posted by Barefoot Doctoral at 7:40 AM No comments:

Email ThisBlogThis!Share to TwitterShare to FacebookShare to Pinterest
Labels: Eggmus

Looking back at the last several posts, I'm realizing that I've been rather negative recently. Some of that is because I found out 3 weeks ago that I'm giving a 25 minute talk on Wednessday, and then 12 days ago that, no, I'm giving an hour long talk today instead. The list of attendees included 3 Very Important People. Needless to say, I've been a bit busy and nervous preparing my talk.

It's over now. Two of the people I was afraid of didn't show up for the morning session, and the remaining was very nice in asking the occasional clarifying question that more felt like gentle prompts to explain things a bit better. On the whole, it was well received. I got a random compliment on it from someone I don't know, and spent lunch talking to two people who had ideas for future work. Whether or not these actually turn into something (lets be honest, most lunch discussions don't) I have a better sense of where this project could go than I did going into the talk.

I made a mistake with this project. I started working on it as a side project in a different direction than I normally work in. And then, instead of reaching out to lots of people who know more about this area, I only really talked to one. As a result, my views on the prospects for this project were primarily shaped by him, and due to various factors, rather negative. Relying on only one other person is truly not a good idea, a lesson I should have learned after working on my thesis. This is my second time learning this the hard way. Maybe it'll stick this time.

At any rate, between the class that kicked my butt last term, the sessions of last conference and the discussions from this one, I am hoping to put a new spin on this project and breathe new life into it. Good times.
Posted by Barefoot Doctoral at 12:02 PM No comments:

Barefoot Doctoral
I am a post doc in a STEM field with a 2+ epsilon body problem that is iteratively solving itself. My family recently changed countries. I spend a lot of time thinking about inequality in education, gender, race, class. Recently I seem to be writing about different ways things are done in my new home country. Sometimes I write poetry.

How I waste my time

Epsilon is my son.
University E is where my partner has a tenure track position.

His Town is the town where my partner and Epsilon live, next to University E.

University F is where I had my last post doctoral position.

My City is the city where I used to commute, containing University F.

My Town is the new target of my commute, containing University G.

Eggmus is a term I stole from Adequate Parent, who no longer blogs. It refers to the cute things that make kids kids, that I both adore, and maybe want to kill Epsilon for.